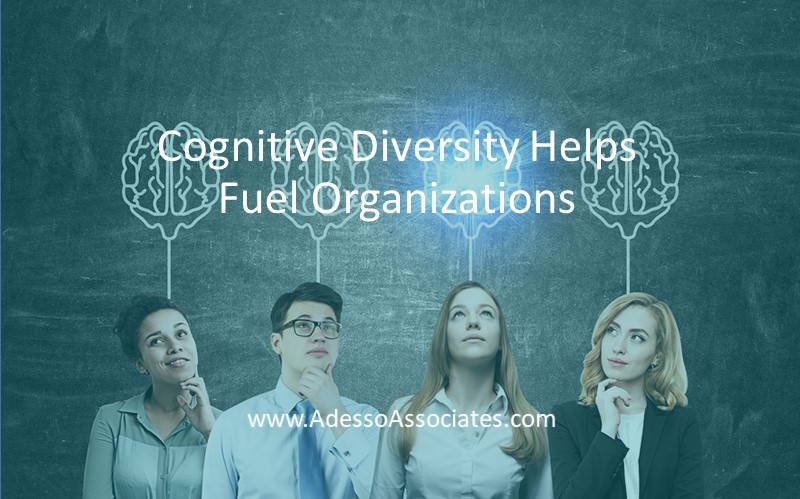 During the past 3-4 months a lot has happened in the US and around the world and as a result many things have changed. With change comes opportunity. One opportunity now and over the next 5-10 years is deliberately focusing on increasing cognitive diversity to help fuel your organization!

In the past diversity was thought of in terms of fairness and representation. Thankfully, over the years the discussion has changed dramatically and diversity has taken on many forms.

As we have found out groups benefit from having a variety of information processing styles. Diversity typically refers to differences in peoples demographic characteristics:

What is cognitive diversity?

It refers to the wide variety of ways that people think, solve problems and their personality-behavior profiles. Other terms used refer to different work-styles, perspectives, backgrounds, styles of learning, cognitive levels and personality types.

Over time we have come to understand how important diversity is to an organizations performance. Some of the best performing companies have focused on balancing demographic and cognitive diversity. For example, companies like McDonald’s and Starbucks have focused on building boards that reflect both demographic and cognitive diversity with solid results. As a matter of fact, some money managers are now adding diversity to the mix when evaluating companies to invest client assets.

When diverse teams collaborate effectively their is an understanding that diversity exists on a cognitive level as well. This diversity creates another level of interest for team members to learn how to communicate and work with a variety of personalities and thinking.

In an article written by Alison Reynolds and David Lewis they showed that there is a significant correlation between increased cognitive diversity and increased performance. Problems were solved significantly faster and with considerably less errors.

Increased cognitive diversity allows teams to assess projects or problems from a variety of perspectives and as a result, this increases creative problem solving. At the same time teams are finding creative solutions, they too are identifying a variety of risks not typically seen with more homogeneous teams.

In an article written by James Haley he points out that typical corporate hiring practices include asking questions during the hiring process like “is this person a good fit” may be the wrong question to ask. If organizations seek new employees that look think and have similar business styles and experiences this creates an organization that looks and thinks alike, therefor lacking diversity and limiting opportunity.

Having a diverse team instantly increases curiosity and interest to learn more about one another. Embracing and employing a cognitively diverse organization is a strong signal to employees that they are inclusive. Being inclusive helps people feel they belong, have shared purpose and feel safe, allowing them to be more engaged.

How can we increase cognitive diversity in our organization?

Communicating openly about the value and importance of cognitive diversity in your organization sets an example to other employees that this matters. Setting this example and empowering people to use their cognitive diversity helps to create an inclusive psychologically safe space for people to be themselves and effectively collaborate and contribute.

If you would like to learn how to tap into the cognitive diversity you currently have or how your organization may benefit by increasing it, please contact us.

Receive information direct to your inbox on how to become continuous learners and create meaningful change.